How much is Rashed el Majed worth? For this question we spent 6 hours on research (Wikipedia, Youtube, we read books in libraries, etc) to review the post. 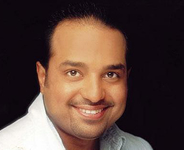 Majida El Roumi Baradhy (Arabic: ????? ???????) (born December 13, 1956) is a Lebanese soprano. Since her first appearance on television, she became one of the most successful singers of the Arab world, as well as a UN Goodwill Ambassador.After releasing her first album Wadaa in 1976, Majida got the attention of well-known Egyptian filmmaker Youssef Chahine and starred in one of his Movies, Awdat Al Ibn Al Dal (The Return of the Prodigal Son). She also performed three soundtracks for the movie. Chahine introduced her as the Voice of the 20th Century and she received the Egyptian Critics Award. Later, Majida was part of Al-Akhar (The Other), a film directed in 1999 by the same international filmmaker and selected for the opening of Un Certain Regard section at Cannes International Film Festival.In 1977, Majida married Antoine Dfouni, a businessman from Byblos, Lebanon, who also became her manager. They had two daughters: Hala and Nour. They got divorced and ended all collaboration in 2006, after disagreements which Majida chose to keep away from any press coverage.In 2005, after the Syrian army was withdrawn from Lebanon, Majida held a concert in Beirut Downtown and it was the first time she sings wearing jeans. In her speech she reiterated her ardent wish for peace in Lebanon and pleaded for the youth to preserve their land and that she believes in their potential and their love for the country. Later in 2009, she received an honorary doctorate for her career and the relentless message for peace in Lebanon. The ceremony was held in the Assembly Hall of the American University of Beirut and hosted by Dr. Peter Dorman.The artist released her album in June 2012, Ghazal, after six years from her previous one. In its making she recorded it between Paris and Beirut, in the studios of Lebanese musician and producer Jean-Marie Riyachi. In January 2013 she was awarded Officer of the Order of Arts and Letters by France (Ordre des Arts et des Lettres) in a ceremony held in the Palace of Pine in Beirut, as a recognition for her contribution to the Arab music, her unremitting actions against famine in poor countries and her ceaseless message for world peace. The event took place in the presence of the French ambassador in Lebanon and more than 150 public figures, politicians and artists.
The information is not available